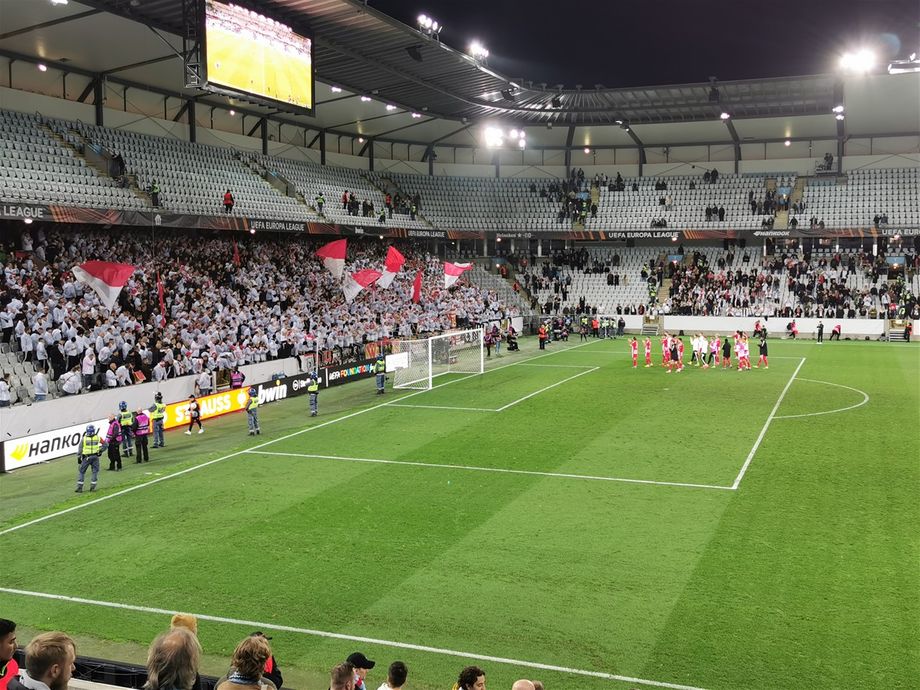 A lot was discussed in advance - how many of us plan to drive down the road to Skåne, how do we get tickets, will it remain peaceful. Eventually, a handful of Bamsegjengen were amongst the ~2,000 Union fans in Malmö, many of which without tickets. Erik and daughter made the journey from Oslo to Malmö, hoping to soak up the spirits and catch the match on TV. Their trip’s highlight was the sight of all those white (and red) people in town, completed with a snap of the Union team bus. Per Ivar was one of the lucky ones who, with Swedish help (thanks Matilda!), got a ticket in the neutral corner just off the Union side. It was a beautiful day in Malmö. The Union fans prepared for the game at Lilla Torg in a relaxed manner and started the walk to the stadium early. All was peaceful in town and around the stadium. On the neutral side Union and Malmö fans sat peacefully together, talking and drinking Norrlands Gull, the 3.5% light version of a decent beer. Everything seemed perfect for Per Ivar - until idiots from the Union block started firing pyro towards the neutral family block (including himself), which was answered with beer mugs and plastic bottles. The waving of Hertha flags and banners from the home side surely contributed to the change of mood during the game. Then hell broke loose for a few minutes and Per Ivar's block was cleared, leaving crying children and panicked parents in the catacombs. Actually, the ‘cannon bomb’ that exploded on the field came from the neutral block roughly where Per Ivar stood before.

Luckily, aggressions calmed down and an important victory was achieved, fiercly celebrated by the players and the Union fans on the away side (picture). Everybody would certainly have been happier about the victory without the earlier events that provide a bitter-sweet taste: a lovely peaceful family outing crowned with an away win was overshadowed by a few ugly minutes during the game.

The big question to answer is this: Why are hooded idiots - not even Union fans - supplied with tickets when real Union fans have to stay home or watch the game in a pub in Malmö? In case there is an away crowd allowed in Brussels after these events in Malmö, let’s hope these idiots are not going to make it there, for the sake of the beautiful stadium, the inviting ‘Union’s Taverne’ in front of its art deco main entrance, and the friendly atmosphere in this lovely area of Brussels. Eisern!