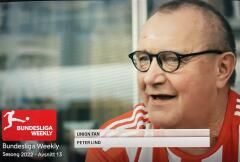 Those of you who watched Bundesliga weekly, episode 13, surely noticed the friendly gentleman with glasses and Union jersey presented there as Peter Lind, Union Fan. For those who do not know him, here an introduction to ‘our’ Peter, notorious optimist and founding member of Bamsegjengen: Born in 1962 in the East German working-class town of Schönebeck, Peter moved to Berlin in 1980 and was infected by the Union Virus shortly thereafter. Like others, it was love that caused his move abroad to Oslo, Norway, in 1991, where he worked/works as psychotherapist and employment advisor, and raised his two daughters. Even if the love that caused the move to Oslo didn't last - his love for Union is going strong and will probably last forever. Thanks to Peter and his cheerful, optimistic nature Union supporters from near and far gathered in Oslo’s Bohemen Sportspub over the years in growing numbers and we became what we are today: Bamsegjengen - Union's largest registered supporters’ group outside Germany with (currently) 25 official members and many more followers on facebook. Eisern!